Workshop on Bioinspired modeling and Computational Neuroscience - From neurons, circuits to models and devices (BioCompNeuro'17)

BioCompNeuro'17 will address the growing relevance of biologically derived models and architectures with a special focus on biologically realistic neural models, its abstractions and application such as in biomedical devices and in robotics, bringing together researchers, mathematicians, scientists, engineers and practitioners throughout the world to present their latest research findings, ideas, developments and applications in the areas of computational neuroscience, neuromorphic engineering and bioinspired computing. The workshop is co-affiliated with Sixth International Conference on Advances in Computing, Communications and Informatics (ICACCI-2017).

The workshop will focus on the following subjects of interest, as well as related issues:

Prospective authors are invited to submit their manuscripts reporting original work. Further guidelines for submission are posted at http://icacci-conference.org/2017/content/paper-submission-guidelines

All papers that conform to submission guidelines will be peer reviewed and evaluated based on originality, technical and/or research content/depth, correctness, relevance to conference, contributions, and readability. The manuscripts should be submitted in PDF format. Accepted and presented papers will be published in the conference proceedings and submitted to IEEE Xplore as well as other Abstracting and Indexing (A&I) databases.

Title of Talk: Computational Mechanisms Underlying the Control of Simple and Complex Movements

Biography: Aditya Murthy's undergraduate training was at St. Xavier's college, Mumbai and Bombay University where he obtained my Masters degree. His doctoral training was with Dr. Allen Humphrey in the Department of Neurobiology at the University of Pittsburgh where he examined the neural mechanisms involved in the processing of motion in the visual system. For his postdoctoral training, he worked with Dr. Jeffrey Schall at Vanderbilt University studying the primate visuomotor system to more directly relate neural activity to psychological functions and behaviour. He was a faculty at the National Brain Research Centre, Manesar prior to joining the Centre for Neuroscience, Indian Institute of Science, Bengaluru. Currently, he is the head at the Centre for Neuroscience, IISc.

Research Interests: Brain Mechanisms of Motor Control
The brain is the most complex information processing systems known to man and considerable neural machinery is devoted to making visuo-motor tasks such as reaching and grasping seem effortless. Drawing from research in robotics many steps are likely to be involved while planning and executing movements. Some of these stages are decision-making or target selection, coordinate transformations, planning kinematics and dynamics, error correction and performance monitoring. While movements in robots can be superior to naturally occurring movements in terms of speed and accuracy, they are still relatively primitive when it comes to mimicking natural behaviours that occur in unpredictable and unstructured environments. Our lab studies the neural and computational basis of movement planning and control with an emphasis to understand the basis of flexibility and control that is the hallmark of intelligent action. From the perspective of behaviour we seek to understand the nature of computations that enable motor control; from the perspective of the brain we seek to understand the contribution of circumscribed neural circuits to motor behaviour; and by recording the electrical activity of neurons and muscles we seek to understand how such computational processes are implemented by the brain. Our research interests span the fields of visual perception, decision-making, and the generation of motor behaviour and involve the application of cognitive/psychophysical, neuropsychological and electrophysiological techniques. We anticipate that in the long term this work will be useful to understand the basis of different motor disorders and develop brain machine interface systems that are only beginning to be exploited as engineering and brain sciences are starting to increasingly interface.

Abstract: A fundamental computation that our brains must perform is the conversion of a stimulus into a motor act. This operation implicitly requires decision-making and motor planning. Using fast eye movements called saccades that rapidly direct our gaze to points of interest in the visual scene we investigate the computational architecture underlying flexible motor planning and control. Using the insights from gained from these experiments we will describe results from recent experiments that provide insights into how the brain might coordinate and control simultaneous eye and hand movements. 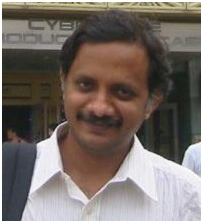 Title of Talk: Understanding the Parkinsonian Brain through Computational Modeling

Biography: V Srinivasa Chakravarthy obtained his PhD degree from the University of Texas at Austin and received postdoctoral training from Baylor College of Medicine, Houston. He is currently a professor in the Department of Biotechnology, at Indian Institute of Technology Madras, India. His research interests are in the areas of computational neuroscience, computational cardiology and machine learning. In computational neuroscience, his interests in modelling of basal ganglia to understand Parkinson’s Disease, modelling neuron-astrocyte-vascular networks and modelling spatial cells of hippocampus. He has written a book titled “Demystifying the Brain” which presents the contemporary computational perspective of the brain to the lay reader using a minimum of equations.

Abstract: We present a model of Basal Ganglia (BG) that departs from the classical Go/NoGo picture of the function of its key pathways – the direct and indirect pathways (DP & IP). Between the Go and NoGo regimes, we posit a third Explore regime, which denotes random exploration of action alternatives. Striatal dopamine is assumed to switch between DP and IP activation. The IP is modeled as a loop of the Subthalamic Nucleus (STN) and the Globus Pallidus externa (GPe).  Simulations reveal that while the model displays Go and NoGo regimes for extreme values of dopamine, at intermediate values of dopamine, it exhibits exploratory behavior, which originates from the chaotic activity of the STN-GPe loop. We describe a series of BG models based on Go/Explore/NoGo approach, to explain the role of BG in three cases: 1) reaching and 2) gait impairment and 3) willed action. 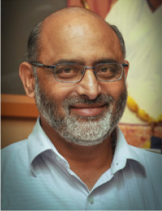 Bipin Nair received his Ph.D. in Microbiology in 1986 from the Department of Microbiology,  M.S. University of Baroda, India and received his post-doctoral training at the University of Tennessee, Memphis, USA, in the Dept. of Pharmacology from 1987-1992.  His major contributions during that phase were in the areas of growth factor receptor signalling, GTP binding proteins and second messenger pathways.  Dr. Nair then moved to the Biotechnology industry in 1993 and held the position of Senior Scientist- Lead Discovery at MDS Pharma Services in Seattle, Washington, USA.  His experience with High Throughput Screening and application of novel technologies to a wide range of target areas, resulted in many significant achievements for MDS, during his tenure as Research Manager--Lead Discovery, at MDS Pharma Services.

In Dec. 2004,   Dr. Nair moved back to India and took over as Professor and Chairman of the Centre for Biotechnology, Amrita Vishwa Vidyapeetham, Amritapuri Campus.  Under his leadership, the School of Biotechnology has been a trail-blazer in the Biotechnology arena for both undergraduate and postgraduate academic programs as well as providing active research opportunities for a large number of students pursuing their Ph.D program at the School.   Dr. Nair is also the Coordinator of the TIFAC Centre of Relevance and Excellence in Biomedical Technology at Amrita University, under the Mission Reach program of the Department of Science and Technology, Govt. of India.   Apart from setting up the State of the Art Amrita Biomedical Engineering (AMBE) Research Centre as part of the TIFAC CORE, Dr. Nair also led the group that developed a prototype of an Automated Insulin Pump, which resulted in Amrita University’s first patent from the USPTO.  Subsequently a number of patent applications (both India and USA) in the area of biomedical devices and diagnostics have been filed.   With active national and international collaborations, Dr. Nair’s laboratory also has well-funded (DST, DBT, CSIR, MHRD) research initiatives in Natural Products Lead Discovery with a focus on wound healing and cancer.   Dr. Nair has numerous publications in national and international scientific journals.  He is also the Discipline wise National Coordinator for the development of Biotechnology Virtual Labs being developed under the MHRD –NMEICT program. Another significant recent (April 2014) feather in Dr. Nair’s cap has been the selection of the Amrita School of Biotechnology by the Bill and Melinda Gates Foundation for the Gates Foundation-DBT-BIRAC Grand Challenge India Sanitation Award. Dr. Nair is an Associate Editor for the International Journal ‘Current Pharmacogenomics and Personalized Medicine’ and also serves on several national and international advisory committees.

Abstract: Diabetes Mellitus is a public health problem affecting 65 million people in India with another 21 million people probably being in the prediabetic stage.  The healthcare infrastructure for diabetes care in India, especially for the middle and low income population is extremely fragmented.  With accessibility, availability and affordability being the issues of optimal healthcare today, there is an acute need for proactive low cost intelligent systems for diabetes care.  The present smart solution being developed involves a totally indigenous, automated insulin pump that is a dual micro-controller based compact programmable drug infusion system.  This US patented cost-effective system could be highly effective for administering insulin therapy, which is the gold standard for diabetes care.  The smart solution also comprises a unique and cost-effective, US patented non-enzymatic glucose monitoring system which involves a glucometer, connected devices, mobility, cloud and helpline based ecosystem. In a mutually beneficial collaboration with Wipro Technologies, Amrita University aims to develop this smart solution with the goal to provide low cost quality care especially for the economically challenged diabetic population across the globe.

Title of Talk: Computational Neuroscience of cerebellum and interconnected circuits

Biography: Shyam Diwakar is the Lab Director of Computational Neuroscience and Neurophysiology Laboratory, a Faculty fellow at the Amrita Center for International Programs and an Associate Professor at Amrita School of Biotechnology, Amrita University. He was awarded the Sir Visvesvaraya Young Faculty Research Fellowship  by Department of Electronics and Information Technology, Govt. of India in April 2016 and the NVIDIA Innovation award in December 2015. He also serves as a executive committee member for Indian Academy of Neurosciences since October 2014. He holds a Ph. D. degree in Computational Sciences from University of Milan, Italy and had worked on as a Postdoctoral Researcher at the Department of  Physiology, University of Pavia, Italy. He is a Senior Member of IEEE, Faculty Member of Organization for Computational Neurosciences (OCNS) and Life Member of Indian Academy of Neuroscience.

Abstract: Over the last years, cerebellum, a small yet significant region of the brain has been connected for its roles in ataxias, Parkinson's, Alzheimers disorders and several other neurological conditions. Signal coding in the cerebellum happens at the input granular layer comprising of a large percentage of cells. With mathematical modeling as the focus, this talk will elucidate the information transmission and signal recoding properties in the cerebellum. To understand circuit function, we modeled population activity such as local field potentials and fMRI BOLD signals. Local field potentials (LFPs) were reconstructed (Parasuram, 2016, 2017) to test and parameterize the molecular mechanisms of cellular function with network properties. The role of synaptic plasticity in modifying the information capability of this circuit will also be addressed. To conclude, we will also show how abstractions of such brain circuits can help as algorithms in robotic control and deep learning.